What Would Mohammad Do?

Looking for reasonable Muslim voices out there in media-land?  Well, I found one, Nahed Eltantawy, a professor at High Point University, and she has a terrific column in the Greensboro News & Record:

"Probably every Muslim has heard the story of Prophet Mohammed (peace be upon him) and his non-Muslim neighbor.

Every day this neighbor would throw garbage in the prophet’s way so as to irritate him, and every day the prophet would walk away peacefully. One day, the prophet walked out of his house and did not find his neighbor who threw garbage. What did the prophet do? He knocked on the neighbor’s door and asked her if she was all right. The neighbor, who had fallen ill, felt very ashamed by her actions.

The moral of the story? Prophet Mohammed (PBUH) never once used anger, let alone violence, to respond to his neighbor, or to others who expressed hatred and violence toward him. Why, then, are some Muslims using rage and violence to honor and defend their prophet? Why can’t we follow in his path and learn from his teachings?"

Sell it to the street, my lady!

Racists: A Column for You

I don't see how racists can read columns like this one by Leonard Pitts, and still come away not realizing that they are racists.  I found this column to be uplifting and full of the kind lessons we need to keep toward the top of our social consciousness.  It's a short read, but sure will stir ya:

"...why should “Don’t Re-Nig” come as a surprise? It’s just the next logical step.
One cannot openly express one’s hate — right up till the day one can. Though even then, one may have to delude oneself."

The Hiker Who Could Have Been President

Imagine a Southern Protestant Christian who didn't sound like a 1%'er on the Republican ticket.  You know who could have stopped Romney back in the primaries?  And who would have had a much better shot at beating President Obama?  No, not Rick Santorum, I'm talking about a real man, like what Republicans used to think about say, Clint Eastwood.  Yes, I'm talking about the hiker, Mark Sanford.  Nobody was in a better position to take on Romney, right up until he, well, took a hike on the Appalachian Trail.

Well, good news for Mark Sanford, as he is clearly head-over-heels in love!  The couple recently announced their engagement, and the tale of the proposal was, er, well: 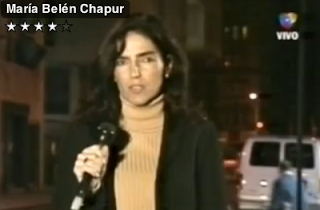 "Sanford arrived early to the Bella Italia Grill in Palermo for a lunch date last week with Maria Belen Chapur, handed a waiter a bag containing the engagement ring and told him to “make up a good story” for her while he hid in the stall.
When Chapur arrived, she was told she had won a prize for being the restaurant’s 100th customer of the day. Though she reportedly didn’t know what to make of the story, Sanford soon emerged to spring his proposal, which she accepted."

So, uh, I guess Mark Sanford may not have been gaff-free, either.  Honeymooning on the Appalachian Trail, I presume?
Email ThisBlogThis!Share to TwitterShare to FacebookShare to Pinterest
Labels: 2012 election, clint eastwood, mark sanford, mitt romney, rick santorum

Grandson of President Jimmy Carter, James Carter, IV is the one who helped get that "47% Romney doesn't care about" video out there, and the whole story is fascinating.  Some exerpts:

"The video then reappeared on YouTube under a different account -- "Anne Onymous." Carter said he was fascinated by the video -- and figured there had to be more to Romney's talk.
"It was just weird video to all of a sudden come across,” he said. “It was all very strange and it piqued my curiosity," he said.
Carter Tweeted a link to the video -- and then soon noticed he had a new follower named "Anne Onymous."
"I recognized it" -- and then messaged the follower back, resulting in a series of exchanges in which he encouraged the poster to come forward and give the full video to Corn. (David Corn at Mother Jones)"

Does it get a little weirder?  Oh yeah.  Check the details surrounding the event where Romney clearly admitted that he just wants to cut taxes for rich people:


"The source who took the video has confirmed to NBC News that it was taken at a May 17 $50,000-a-plate fundraiser at the Boca Raton, Fla., home of private-equity mogul Marc Leder, chief executive of Sun Capital Advisors.

Leder has given $225,000 to Restore Our Future, the pro-Romney Super PAC, in addition to raising money for Romney's presidential campaign. He has also been the subject of controversy after a report in the New York Post last year -- under the headline "Nude Frolic in Tycoon's Pool" -- about a wild party at his Bridgehampton mansion in which, according to the Post's account, "guests cavorted nude in the pool" and scantily clad Russian dancers performed on platforms."

Oh, and I should remind everyone about exactly why Mitt Romney is not fit to criticize former President Jimmy Carter... well, I've said it before:  You're unfit to carry his bags, mister.  How dare you?

And while I'm at it, though I may be tempting fate, I feel I must point to this post from almost a year ago, titled "I'm Making a Prediction".
Email ThisBlogThis!Share to TwitterShare to FacebookShare to Pinterest
Labels: 2012 election, jimmy carter, mark leder, mitt romney

I don't bother commenting on this guy's many, many, many posts on Facebook, I think he's doing a good enough job tearing down the party he supports, and he needs no additional help from me.  I left out the names, I just want to show an example of what's out there.  Here's the pic he posted and the only 3 comments. 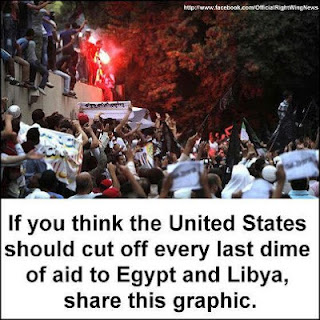 commenter: Agreed. Muslims are a cancer to the planet. We should not tolerate a religion that rewards INSANE behivor anymore than we tolerate satanic cults sacrificing 13 y/old virgin women in america. Both "Religious beliefs" of radical muslims and satan worshipers must dealt with an iron fist.
Yesterday at 12:52pm · Like

Now let me be sure to clarify that I don't agree with this graphic or those sentiments.  In any way.

Please check out the rest of my blog if you doubt me.  I am pointing out "what is out there", and if this is what you want, well, then I guess you should vote for the candidate they support?

I May Have Been Wrong on a Couple of Things

So, I've been blogging since 2004, and several early posts had me doubting global warming was caused by man.  I suggested we couldn't know that for sure since there are so many variables, but more evidence has mounted in the past 5 years, and I have to admit that I was probably wrong and climate change like we are experiencing is most likely mostly mankind's fault.  It has taken me some time to come around, and I don't believe all the "chicken little" stuff out there, but mounting evidence of humans' contribution to global warming has convinced me.  Here's the article that finally made me "come out".  A passage of interest:

The other thing I was wrong about.... Hillary Clinton.  While I am still happy that Obama won out, even naysayers like me have to admit that Hillary has done an excellent job as Secretary of State.  I no longer get the urge to vomit when I see her, and I might even vote for her in 2016.  Sorry about all those "Stop Hillary" posts.
Email ThisBlogThis!Share to TwitterShare to FacebookShare to Pinterest
Labels: climate change, global warming, Hillary Clinton, wrong

Bill Clinton delivered the greatest convention speech I've ever seen in Charlotte last week.  What a performance.  (that's a link to a terrific column in The New Yorker that details the performance.  example: "He improvises, in the sense that Miles Davis or Beethoven would come up with an enduring work of art on the spot.")

Flip to 3:30 and hear the maestro deliver the 'alternate universe' line.   If you watch for 2 minutes, you'll get to see Chelsea's hot friend!


"The third mechanism is by using its own misinformation outlets – led by Fox News, Rush Limbaugh and his yell-radio imitators, book publisher Regnery, and the editorial page of the Wall Street Journal, along with a right-wing blogosphere – to spread the lies, or at least spread doubt about what’s true.

Together, these three mechanisms are creating a parallel Republican universe of Orwellian dimension – where anything can be asserted, where pollsters and political advisers are free to create whatever concoction of lies will help elect their candidate, and where “fact-checkers” are as irrelevant and intrusive as is the truth."

The Atlantic has been crushing it this year, easily my favorite publication right now.  Here's an article that really lays out Romney/Ryan and their plans for our already bloated deficit:

It remains the case that the Romney-Ryan ticket, as fleshed out in recent days, is running on the following:
What about those policy promises suggests to deficit hawks that Mitt Romney and Paul Ryan will shrink the deficit? Meanwhile, the GOP ticket promises to eliminate tax deductions but won't specify which ones. Naturally, the deductions that cost the most are correspondingly popular with voters. How is it that deficit hawks fail to appreciate the fact that the most likely parts of the Romney-Ryan agenda to pass are the tax cuts, increases in military spending, and the restoration of $700 billion plus to Medicare, while the least likely to pass are the elimination of tax deductions?

So for all you folks out there trying to put the deficit anvil around Obama's neck, what do you think about the Romney/Ryan plan?  I mean really.  What do you think?  I know.  You know I know and now you know you know, too.
Email ThisBlogThis!Share to TwitterShare to FacebookShare to Pinterest
Labels: deficit, military spending, mitt romney, taxes

The Charlotte Observer recently had an interesting column about the middle class:


It’s all vanishing. If we stay on this trajectory, a majority of residents will not be middle class. (As defined by Pew, the middle class is a household that makes between 67 percent and 200 percent of the national median income.)
Some of Pew’s findings:
• Just 51 percent of adults were in the middle class in 2011 – down from 61 percent in 1971.
• The middle class’s median wealth dropped 28 percent in the decade since 2000, and its median income fell 5 percent.
• The middle class’s share of the nation’s household income has dropped from 62 percent in 1971 to 45 percent now. The lower-income group has stayed about the same, and the upper class has increased its share, from 29 percent to 46 percent.
“The notion that we are a society with a large middle class, with lots of economic and social mobility and a belief that each generation does better than the next – these are among the core tenets of what it means to be an American,” Pew’s Paul Taylor told the Los Angeles Times. “But that’s not necessarily the case anymore.”

I'll SEAL This Leak, and Raise You Another

For all the folks clamoring about the military "secrets" coming out of the White House (Obama is a good leader!.... we can't have that!), where are you in complaining about the Navy SEAL that is releasing this book?

"Rear Adm. Sean Pybus told his force Tuesday that "hawking details about a mission" and selling other information about SEAL training and operations puts the force and their families at risk.
"For an elite force that should be humble and disciplined for life, we are certainly not appearing to be so," Pybus wrote in a letter to the roughly 8,000 troops under his command. "We owe our chain of command much better than this.""


I look forward to hearing the right wing complain about this, just like they did when the White House was releasing "secrets".