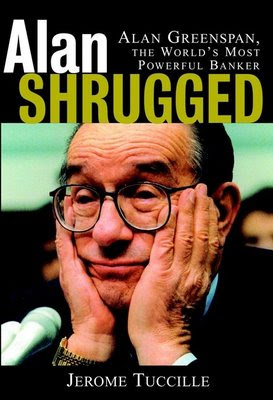 David Corn has a really interesting article over at Mother Jones about Alan Greenspan's testimony before Congress last week. I don't think it got enough attention from the media. The economic Godfather of the past 40 years was wrong. Majorly wrong. And, he admitted it. As bad as the news is, at least it is refreshing to hear a decision-maker take some of the blame. Anyway, here's a quote from the article for ya:

With members of the House oversight and government reform committee blasting Greenspan for his past decisions that helped pave the way for the current financial crisis, he acknowledged that his libertarian view of markets and the financial world had not worked out so well. "You know," he told the legislators, "that's precisely the reason I was shocked, because I have been going for 40 years or more with very considerable evidence that it was working exceptionally well." While Greenspan did defend his various decisions, he admitted that his faith in the ability of free and loosely-regulated markets to produce the best outcomes had been shaken: "I made a mistake in presuming that the self-interests of organizations, specifically banks and others, were such as that they were best capable of protecting their own shareholders and their equity in the firms."

In other words, whoops—there goes decades of Ayn Rand down the drain.

I couldn't resist using the title "Alan Shrugged" from Mother Jones.... came to find out it's also the title for Jerome Tuccille's pdf novel.
Email ThisBlogThis!Share to TwitterShare to FacebookShare to Pinterest
Labels: Alan Greenspan, decline of empire

Where Our Taxes are Spent

Today, the 15th of October, is the day for bloggers to stand up and point the spotlight at Poverty. Too bad John Edwards has been silenced, but I digress. Look at my previous "Bono" and "Africa" postings. And tonight thank God it's them instead of you.

Believe it or not, Congress approved another bill for over $600 Billion last week. Not the "bailout" bill, this one if for Defense Appropriations for 2009. Alternet points out:

On Wednesday, September 24th, right in the middle of the fight over billions of taxpayer dollars slated to bail out Wall Street, the House of Representatives passed a $612 billion defense authorization bill for 2009 without a murmur of public protest or any meaningful press comment at all. (The New York Times gave the matter only three short paragraphs buried in a story about another appropriations measure.)

The defense bill includes $68.6 billion to pursue the wars in Iraq and Afghanistan, which is only a down-payment on the full yearly cost of these wars. (The rest will be raised through future supplementary bills.) It also included a 3.9% pay raise for military personnel, and $5 billion in pork-barrel projects not even requested by the administration or the secretary of defense. It also fully funds the Pentagon's request for a radar site in the Czech Republic, a hare-brained scheme sure to infuriate the Russians just as much as a Russian missile base in Cuba once infuriated us. The whole bill passed by a vote of 392-39 and will fly through the Senate, where a similar bill has already been approved. And no one will even think to mention it in the same breath with the discussion of bailout funds for dying investment banks and the like.

Billions here, billions there.... you know what they say.
We need to re-think out spending policies, and get our priorities in order. How about building bridges and highways in our Georgia rather than in Russia's Georgia? We need infrastructure dollars for our own country, dollars we say we don't have, but somehow we come up with those dollars for infrastructure projects in Iraq, Georgia, Pakistan, etc. And call it a defense expenditure. And we don't even talk about it....
Email ThisBlogThis!Share to TwitterShare to FacebookShare to Pinterest
Labels: decline of empire, military spending
Newer Posts Older Posts Home
Subscribe to: Posts (Atom)