Bono doing his best MLK at the NAACP Awards. Worth the look, stay till the end, he has the crowd standing and cheering, tears at the ready in this moving speech....

Been trying some long exposure shots and here's one I took this weekend of the Oak Island Lighthouse. 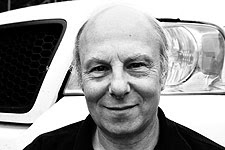 James Howard Kunstler has two articles on Alternet about oil dependence/peak oil/American society, and they're worth a read. I don't agree with everything, and neither do the worthy commenters, but there is real truth here, the harsh kind of truth we humans don't want to face:

Ten Ways to Prepare for a Post-Oil Society

"We have to live differently. We're going to have to re-inhabit and reconstruct our civic places -- especially our small towns -- and we're going to have to use the remaining rural places for growing food locally, wherever possible.
Our big cities will probably contract, while they densify at their centers and along their waterfronts. Our suburbs will enter a shocking state of economic and practical failure.We cannot imagine this scenario because we have invested so much of our collective wealth the past 50 years in the infrastructure for a way of life that simply has no future.
We'd better start paying attention to the signals that reality is sending or we will be living in a very violent, impoverished and demoralized nation. And we have to begin somewhere, which is why I suggest we start by rebuilding the national passenger railroad system. It would have a significant impact on our oil use. It would put a lot of people to work on something meaningful and beneficial to all ranks of American society. The equipment is lying out there rusting in the rain, waiting to be fixed. We don't have to re-invent anything to do it.
The fact that we are not even talking about such solutions shows how unserious we are."
Email ThisBlogThis!Share to TwitterShare to FacebookShare to Pinterest
Labels: peak oil

...for George W. Bush. George McGovern is back writing for the Nation, and he has lots of questions for the president. He begins with a tale from a great NC Senator:

"Once when Senator Sam Ervin of North Carolina had to handle a tough question from Mike Mansfield, he said, "You know, Mr. Leader, that question reminds me of the old Baptist preacher who was telling a class of Sunday school boys the creation story. 'God created Adam and Eve and from this union came two sons, Cain and Abel and thus the human race developed.' A boy in the class then asked, 'Reverend, where did Cain and Abel get their wives?' After frowning for a moment, the preacher replied, 'Young man--it's impertinent questions like that that's hurtin' religion.'"

Well, Mr. Bush, Jr. I have some impertinent questions for you."

From Jim Hawkins at Inside Carolina: 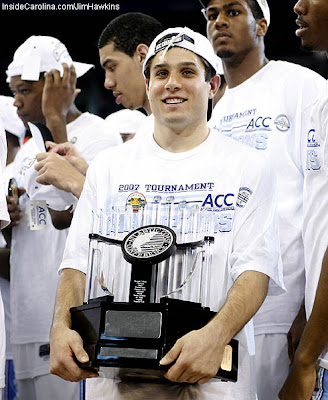 One of Dad's fraternity brothers at the Championship in Tampa: 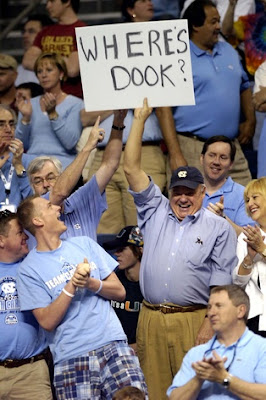 Billy Packer is an Ass 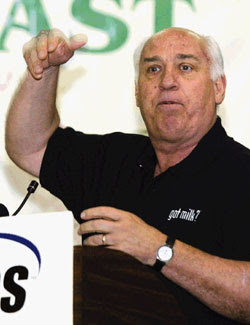 Even people who don't follow Carolina/Duke or the ACC are incensed by Billy Packer's remarks after "the incident" with Gerald Henderson:

"Anonymous said...
I am a 48 year old former athlete with a family. I have much more to worry about than the outcome of a ballgame. However, I still enjoy watching games with my son and it is a wonderful way to bond with him. We sit and watch and cheer for our favorite teams.

My son was quite surprised at my reaction to Billy Packer. I was yelling at the T.V. for his absurd analysis of the situation. I have never written an e-mail regarding a sporting event in my life. This is my second one since Sunday evening. Enough said!" 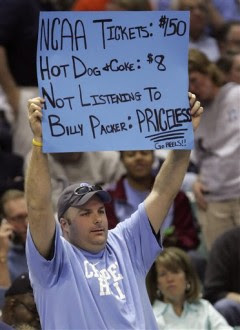 It's not just Carolina fans who think Packer was out of line. This is like one of those political scandals where the cover-up becomes worse than the crime. It's somewhat understandable how play can get out of hand, and a foolish action can lead to a bloody mess. But the real problem for me is the aftermath....no apology from Henderson to speak of, Coach K insinuates that it's Roy's fault for having Tyler in the game, and Billy Packer says 11 times in 4 minutes that it was not intentional, that it should have been just 2 free throws like any other foul. And he's defending his comments today. More from Charlotte Observer here:

PACKER: I felt the call was just not consistent with common-sense refereeing. I've seen the replay probably a dozen times. The more I see it, the more I believe what I said on the air. It should have been a shooting foul, and that's it. There's no way it was premeditated, that Henderson said: "I'm going to go get Hansbrough."


Email ThisBlogThis!Share to TwitterShare to FacebookShare to Pinterest
Labels: billy packer is an ass, Carolina Basketball 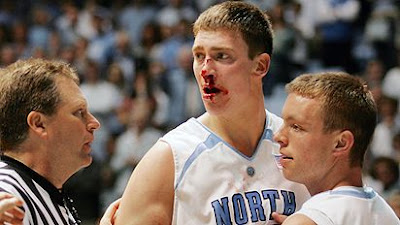 Back when John Edwards was our Senator, I e-mailed to encourage him to meet with Bono when he was coming to the Hill to see Jesse Helms. To my knowledge, Bono and Edwards only met fairly recently, and I have not seen pictures or anything out there of the Edwards or Obama meetings. Here's an old favorite:

Obama and Bono together? Sounds good to me! I'd like to be a fly on the wall in that room...

The two met for about a half-hour in the Illinois senator's personal office in the Hart Senate building to talk about the ONE Campaign, a non-profit organization that the Irish rock star helped form to combat AIDS and world poverty, according to Ben LaBolt, a spokesman for Obama.

"Bono was making rounds on the Hill to build support for the ONE campaign. He particularly wanted to meet with Sen. Obama since he's a member of the Foreign Relations Committee and has been active on international poverty and global health issues," LaBolt said.

LaBolt said the two did not discuss particular programs or legislation but "had a general discussion about how foreign assistance to the right programs [anti-poverty, global health] can boost our security and the standing of the U.S. around the world."
Email ThisBlogThis!Share to TwitterShare to FacebookShare to Pinterest
Labels: barack obama, Bono, John Edwards
Newer Posts Older Posts Home
Subscribe to: Posts (Atom)