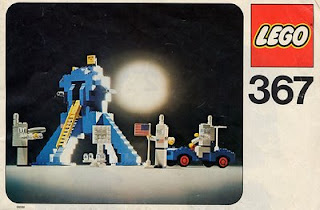 Geek websites I read celebrate all things LEGO, and I came across this picture of the Apollo Lander. I stayed up all night making this very model when I was about 8.

The new U2 song "Magnificent" has sparked a Bible/God debate over at Camille Paglia's column at Salon, as she and some readers battle over the song's meaning. Here's her retort to a long and detailed question from reader Don Stockton:

Thank you very much for your good wishes. And my thanks also to Joseph Hartman of Arlington, Va., who wrote in to argue as eloquently as you have that the U2 song is "a psalm to God."

However, I must respectfully disagree. "Magnificent" is definitely a magnificat, a hymnlike song of praise, and it is permeated with religious references -- much as love songs often were in African-American soul music. But as I interpret Bono's lyrics (from my classroom experience as a teacher of poetry), there are several key details suggesting that it is not God but the audience who is being addressed. "I didn't have a choice but to lift you up": Surely Bono is not telling God that He needs lifting! It's the audience who need intervention and exaltation. "You and I will magnify": Devout humans do the magnifying, not God, the subject of that magnification.

Yes, Bono is saying he was destined to sing -- like the Celtic bards before him. He was one of the chosen few even as a squalling infant. "I was born to be with you in this space and time": the "you" here is not God, who exists outside of space and time, but other mortals subject to limitation. The soul had to leave God to come to earth. In professing uncertainty about what is beyond the grave, Bono is rejecting Christian orthodoxy. The "Magnificent" to whom he sings might well be God, but it could also be the universe or life itself.