The Answer is: No Deal!

Way to lead on this one, Senator McCain.

Fact is, those House Republicans, well, lots of Republicans don't really like John McCain that much. You won't hear it from Rush and Sean Hannity these days, but they don't like him, either, and they used to speak of him with disgust.
Email ThisBlogThis!Share to TwitterShare to FacebookShare to Pinterest
Labels: john mccain

Deal or No Deal?

Will the House Republicans stand on principle or for principal?

I don't like a bailout, I'm more of a free-market guy, but there comes a time when concessions must be made to save the whole system. I think Bush made a good case for this in his speech.

What's McCain gonna do? Does he have any power with House Republicans?

Here's what the Economist has to say this morning:
http://www.economist.com/world/unitedstates/displayStory.cfm?story_id=12305567&source=features_box1

This is gonna be a big day. Hang in there, folks!
Email ThisBlogThis!Share to TwitterShare to FacebookShare to Pinterest
Labels: john mccain 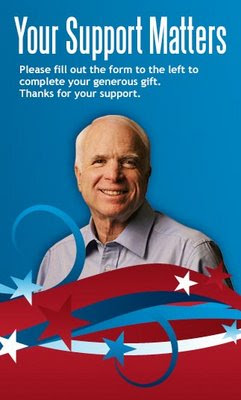 My friends, John McCain has suspended his campaign, but he'll still take your $$ for his campaign.
Here's a link to make a donation to the McCain campaign. It's active this morning, while his campaign is suspended.

I'm not suggestion you donate, I just want to point out that he's only suspended the part of the campaign he wants to suspend. He'll still take your money!
Email ThisBlogThis!Share to TwitterShare to FacebookShare to Pinterest
Labels: Election 2008, john mccain

Bono 'Stood Up' by Palin/McCain 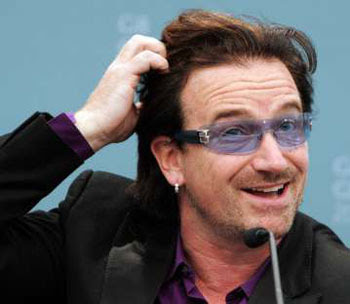 NEW YORK (CNN) – John McCain and Sarah Palin’s meeting with Bono was canceled Wednesday due to scheduling reasons, according to the campaign.

Instead, McCain and Palin will chat with Bono by phone this afternoon about the ONE Campaign, the U2 front man’s initiative to raise awareness of AIDS and global poverty.

Unlike McCain and Palin’s other meetings with dignitaries in New York this week, most of which had been open to reporters and photographers, the Bono meeting was listed as closed to the press, at the rock star’s request.

And it looks like McCain won't show for Letterman tonight
From Drudge:

David Letterman tells audience that McCain called him today to tell him he had to rush back to DC to deal with the economy.

Then in the middle of the taping Dave got word that McCain was, in fact just down the street being interviewed by Katie Couric. Dave even cut over to the live video of the interview, and said, "Hey Senator, can I give you a ride home?"

Earlier in the show, Dave kept saying, "You don't suspend your campaign. This doesn't smell right. This isn't the way a tested hero behaves." And he joked: "I think someone's putting something in his metamucil."

"He can't run the campaign because the economy is cratering? Fine, put in your second string quarterback, Sara Palin. Where is she?"

"What are you going to do if you're elected and things get tough? Suspend being president? We've got a guy like that now!"

No debate with Barack on Friday? Maybe he should just suspend his campaign altogether.

I hear there's plenty of work for the poultry industry... ducking and being a chicken.
Booooo! I want my Palin/Bono photo-op. I feel cheated.....
Email ThisBlogThis!Share to TwitterShare to FacebookShare to Pinterest
Labels: Bono, john mccain, Sarah Palin

McCain to be there, too

Ya know, for that Palin-Bono meeting. 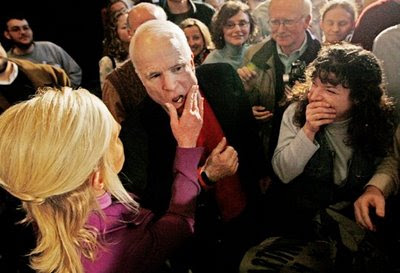 Bono's keeping a blog this week, at the Financial Times.

Tip for Obama for Friday

WSJ has a preview for Friday's big debate:

Obama advisers, for example, are considering how to provoke Sen. McCain into anger or showing what they say is how out of touch, or old, he is.

I suggest Obama find a way to say "Trollop" or maybe even "comb-over", it's worked before. (warning: McCain calls his wife a couple of bad words) 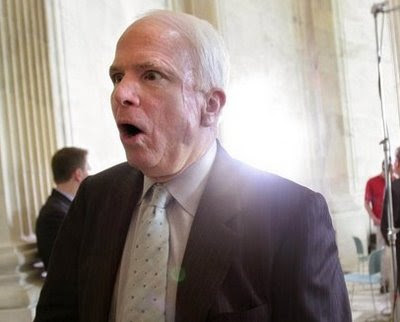 Yeah, I'm sinking that low. This is one of those stories that just didn't get any MSM coverage. If McCain were running an honest campaign like he did in 2000, I wouldn't have mentioned it.
Email ThisBlogThis!Share to TwitterShare to FacebookShare to Pinterest
Labels: john mccain

According to tvnz and others:

Palin, the Alaska governor who Republican presidential nominee John McCain picked to be his running mate earlier this month, will meet with Iraqi President Jalal Talabani on Wednesday. She has meetings with Georgian President Mikheil Saakashvili, Ukrainian President Viktor Yushchenko, Pakistan President Asif Ali Zardari, and Indian Prime Minister Manmohan Singh on the same day. The appointments are in addition to meetings the campaign previously confirmed for Palin on Tuesday with Afghan President Hamid Karzai and Colombian President Alvaro Uribe as well as a sit-down with former US Secretary of State Henry Kissinger. Palin will also meet with U2 lead singer and activist Bono on Wednesday.

And look who Bono took to church in NYC yesterday: 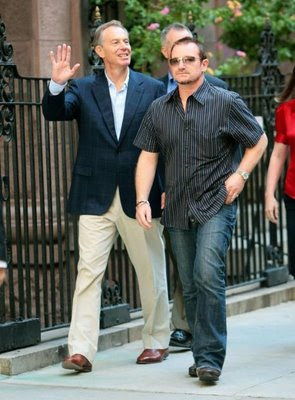 Oh, this stuff is rich, and I mean rich: 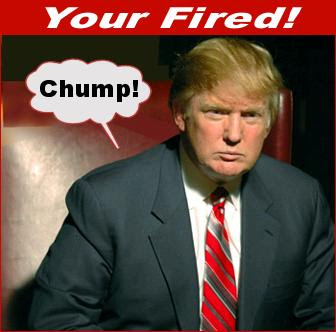 "I'm with him based on the fact that I have great knowledge of John McCain. Also, this is not the right time for tax increases. And Obama wants to increase your taxes drastically.”

Well, maybe not your taxes. But certainly The Donald’s: Obama would repeal President Bush tax cuts for households making more than $250,000." 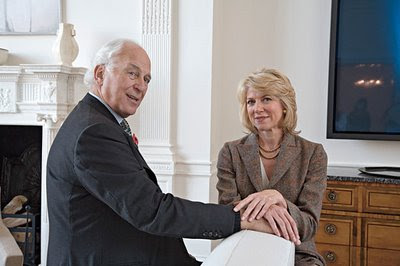 "She and her husband, Sir Evelyn Robert Adrian de Rothschild of the prominent Rothschild banking family of England, split their time between New York and a British country estate. ...

In a July interview with CNN, Rothschild explained why, despite Clinton's calls for party unity, she couldn't back Obama. "I don't like him," she said. "I feel like he is an elitist.""

Desmond Tutu is one of my favorite people, he just has that great smile and positive outlook on things even when the forecast is bleak. He has a terrific article that shines hope for America's future: 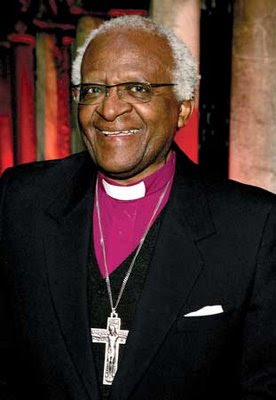 "For several years now, American pundits have commented sadly on the alleged rise of anti-Americanism abroad.

I am not aware of any such anti-Americanism. What has been growing is resentment of and opposition to certain, current U.S. government policies. America itself still stands tall in international eyes as a stronghold of democratic values and the ideals of individual liberty. All that remains is for informed citizens to stand up in November and call the country back to its roots."

I wish more folks had his good nature.
Email ThisBlogThis!Share to TwitterShare to FacebookShare to Pinterest
Labels: decline of empire, Desmond Tutu

Seven hundred and sixty-one. Tom Engelhardt has an enlightening article over at Alternet called:

The US Has 761 Military Bases Across the Planet, and We Simply Never Talk About It

You would think that all of this would be genuine news, that the establishment of new bases would regularly generate significant news stories, that books by the score would pour out on America's version of imperial control. But here's the strange thing: We garrison the globe in ways that really are -- not to put too fine a point on it -- unprecedented, and yet, if you happen to live in the United States, you basically wouldn't know it; or, thought about another way, you wouldn't have to know it.

In Washington, our garrisoning of the world is so taken for granted that no one seems to blink when billions go into a new base in some exotic, embattled, war-torn land. There's no discussion, no debate at all. News about bases abroad, and Pentagon basing strategy, is, at best, inside-the-fold stuff, meant for policy wonks and news jockeys. There may be no subject more taken for granted in Washington, less seriously attended to, or more deserving of coverage.

The article is rather long, but this is one of those stories that deserves more attention than the lipstick-laden pig.
Email ThisBlogThis!Share to TwitterShare to FacebookShare to Pinterest
Labels: decline of empire, military spending

Still a Hole (Where My Heart NY Used to Be)

Flew over the WTC site this past weekend, still a hole 7 years later. A-hole.

Reminds me we still don't have the bastards who planned and financed this dastardly deed, either. I'm still mad. I still want to get even, get justice for those poor innocent folks who died on 9/11. 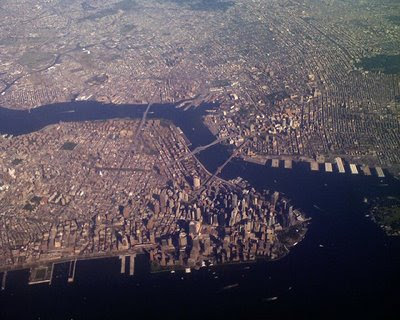 Since the 2004 election, I've been wondering about the intelligence of the American voter. In large part, the Mainstream Media is responsible for our collective lack of knowledge on important issues that face the country. Here's an idea that Republicans might like since it has worked so well for teachers:

From Common Dreams: "Perhaps, we can introduce a system of merit pay for reporters and news producers in which their pay depends on their success in educating the public on key issues, just as many school districts make the pay of schoolteachers dependent on how well their students perform.

Schoolteachers whose students perform badly don't get raises and could even get fired. Imagine that we applied the same standards to CBS, NBC, NPR and The Washington Post. If their audience couldn't answer basic questions about important public policy issues, then the reporters responsible get their pay cut. If the audiences are especially poorly informed, then the reporters get fired.

Unfortunately, this sort of accountability in the media doesn't exist. Most political reporters sound like high school drama coaches as they spend their time talking about candidates' appearance and speaking mannerisms. They almost never bother to discuss the positions advocated by the candidates - that might require a few minutes of real work."

If the MSM did this, news on TV would be worth watching!