with Dub and Marley, too. Merry Christmas! 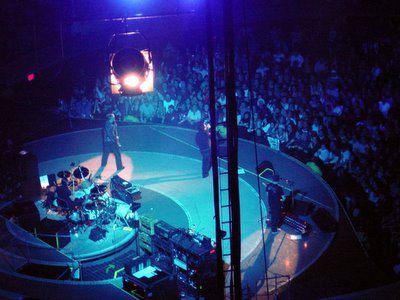 Behind the stage and up high, but still worth it. Vertigo Tour? Check!
Email ThisBlogThis!Share to TwitterShare to FacebookShare to Pinterest
Labels: u2

Bono stayed at the conservative patriarch's right hand, doing what he could to help. For the photographers, it would have been hard to imagine a stranger image than this delicate dance between the aging senator and the rock superstar.

"You know, I love you," Helms said softly.

The singer gave the 79-year-old Helms a hug. This private session with a circle of senators during U2's recent Washington stop wasn't the first time Bono and Helms have discussed poverty, plagues, charity and faith. Nor will it be the last. Blest be the ties that bind.

"What can I say? It's good to be loved -- especially by Jesse Helms," Bono said two days later, as his campaign for Third World debt relief continued on Capitol Hill.
Email ThisBlogThis!Share to TwitterShare to FacebookShare to Pinterest
Labels: Bono, Jesse Helms

My mother-in-law scooped me on this story!

What must Steve Jobs think of this?
Email ThisBlogThis!Share to TwitterShare to FacebookShare to Pinterest
Labels: Bono 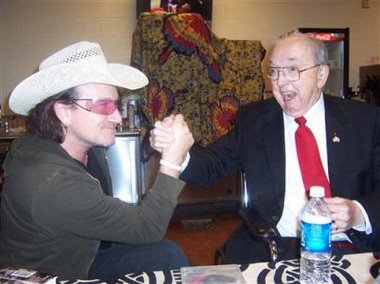 "Because of a delay that reportedly resulted from a... meeting between Bono and Billy Graham, U2 didn't show up until around 6:30, making Bono unfashionably late for a meeting with Jesse Helms, who had arrived earlier and waited inside the stadium.

Still, Bono and Edge got out and did a quick round of handshakes for the few fans that had stuck it out this long."