Steve Chapman at Reason had a great piece on torture, back on May 9th, and what really led to bin Laden:


"But it turns out that Mohammed also lied about the courier, saying he was a retired nobody. From this, CIA officials now claim, they knew the guy had to be a big deal. It was a crucial clue.
That's right: When tortured detainees provide truthful information, they prove torture works, and when they lie, they prove it works. If Mohammed had broken into a chorus of "Y.M.C.A.," that would have proved the same.
This bizarre reasoning is one of the many oddities about the defense of torture. Another is that the advocates never, ever refer to it as torture."

And this is a good place for one of my favorite torture videos, enjoy:

William Astor of TomsDispatch asks: Are we not unlike 18th Century European Monarchs? 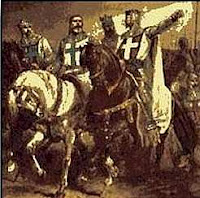 "Our wars and their impact are kept in remarkable isolation from what passes for public affairs in this country, leaving most Americans with little knowledge and even less say about whether they should be, and how they are, waged. In this sense, our wars are eerily like those pursued by European monarchs in the seventeenth and eighteenth centuries: conflicts carried out by professional militaries and bands of mercenaries, largely at the whim of what we might now call a unitary executive, funded by deficit spending, for the purposes of protecting or extending the interests of a ruling elite."

And who's right on top of the new mercenary money binge?  Erik Prince, formerly known as founder of Blackwater, (a company that changed its name to a symbol that only the artist formerly-and-now-once-again-known as Prince can pronounce), has pounced on the opportunities in the Middle East "uprisings" and stands prepared to act in whatever manner the top dollar brings:


Two UAE government officials contacted by Reuters declined immediate comment on the New York Times report, and the U.S. embassy in the UAE also had no immediate comment. It was not possible to locate Prince for comment.
The Times quoted a U.S. official who was aware of the program as saying: "The Gulf countries, and the U.A.E. in particular, don't have a lot of military experience. It would make sense if they looked outside their borders for help."
State Department spokesman Mark Toner told The Times the department was investigating to see if the project broke any U.S. laws. U.S. law requires a license for American citizens to train foreign troops.
Toner also pointed out that Blackwater, now known as Xe Services, had paid $42 million in fines in 2010 for training foreign forces in Jordan without a license, the Times said.
According to former employees of the project and U.S. officials cited by the Times, the troops were brought to a training camp in the UAE from Colombia, South Africa and other countries, starting in the summer of 2010.
They were being trained by retired U.S. military, and former members of German and British special operations units and the French Foreign Legion, the Times said.
Prince had insisted the force hire no Muslims, because they "could not be counted on to kill fellow Muslims," the paper said.

Reading these two articles together makes me think that the first article didn't go back far enough.  This is much more like the Crusades in the Middle Ages.  Plus, as a Doobie Brothers fan, I'm super mad at Mr. Prince for giving the term "Blackwater" a nefarious connotation. 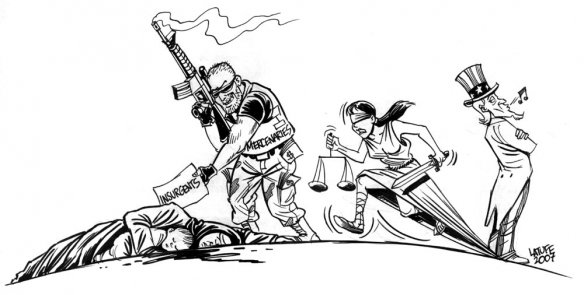 Wow, turns out, EXXon pays about the same percentage in tax as the Top 400, about half what they should pay:

"Exxon Mobil registered an average 17.6 percent federal effective corporate tax rate on its annual earnings in the three years spanning 2008 to 2010. Its average domestic profits exceeded $6.8 billion. And as a 2011 Citizens for Tax Justice report points out:

Over the past two years, ExxonMobil reported $9,910 million in pretax U.S. profits. But it enjoyed so many tax subsidies that its federal income tax bill was only $39 million -- a tax rate of only 0.4 percent.
Even when Exxon Mobil had a record profit of $40 billion in 2008 due to record oil prices it had only a 31 percent effective tax rate. That’s 13 percent lower than the maximum 35 percent despite being Exxon Mobil's fifth year as the top corporate earner in Fortune 500’s annual listing. The company paid no taxes at all to the U.S. federal government in 2009 on its domestic profits of nearly $2.6 billion. It appears that they avoided the tax man that year by legally funneling their profits through wholly owned subsidiaries in countries like the Cayman Islands, and reinvesting their earnings overseas."

It looks like the ultra rich and most profitable corporations have found a way to pay only the percentage they think is fair.  I mean, if you asked them what they thought would be fair, wouldn't they jump at 17-18%?  What a deal!  But we all have to pay more taxes than we want to, at least, those of us in the bottom 99% that are people do.
Email ThisBlogThis!Share to TwitterShare to FacebookShare to Pinterest
Labels: taxes

Sam Pizzigati has an interesting article over at Alternet that shows how little the Top 400 actually pay in taxes as a percentage of their income.  It's about half of what the government should collect, 18% rather than 35% (the supposed tax rate for the top bracket): 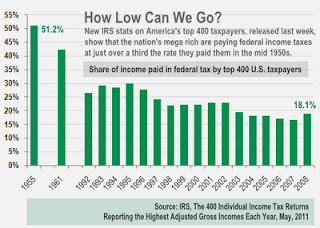 "In 2008, the IRS revealed last week, 400 Americans reported at least $110 million in income on their federal tax returns. These 400, in a year that ended with millions of Americans out of work and home, averaged $270.5 million each, the second-highest U.S. top 400 average income on record."