Down the left hand side of the page, below the flickr boxes, you'll notice a new feature, Yahoo! Babel Fish, the online translator. Now if you want to read the watts4u2 blog in Dutch, it's possible. The world is a freer place now, thanks Babel Fish!

Wow...a cool new feature that keeps track of my playlists. This should be interesting over time. You can join in the fun, includes a free streaming radio at 128 kbps. Click on the iPod to the left for more info, the one to the right is just for show. Thanks to u2log for pointing this out, they turned me on to blogging and flickr, so I expect this to be a hit
Email ThisBlogThis!Share to TwitterShare to FacebookShare to Pinterest
Labels: music

One Certainty About Iraq

The One Certainty About Iraq: Spiraling Costs for Americans: "There are many uncertainties about the progress made by coalition forces and the future prospects for stability and democracy in Iraq, but there is at least one indisputable fact: The Bush administration vastly underestimated the costs of the Iraq war.

Not only in human lives, but in monetary terms as well, the costs of the U.S.-led invasion of Iraq far exceed the administration's initial projection of a $50 billion tab. While the number of American casualties in Iraq has declined this year, the amount of money spent to fight the war and rebuild the country has spiralled upward."

Initial projection: $50 Billion
Latest projection: $1 Trillion
That's 20X more than projected.
And look what we have to show for it!
Email ThisBlogThis!Share to TwitterShare to FacebookShare to Pinterest
Labels: george w. bush, iraq war, war cost

Creeping toward oil as a social good | csmonitor.com: "The list of answers to higher priced energy, viable or not, is endless. What the US really needs first, though, is a consensus on just how much more government intervention is needed in the private business of oil. Yes, Congress passed another energy bill last year. But tell that to someone who just paid more than $3 a gallon.

A creeping federal role in oil has been taking place for decades, primarily for two reasons: One, foreign governments control more than three-quarters of oil reserves through national oil companies. And two, oil prices rise steeply when a crisis hits one of these often-unstable governments, or one of them uses energy as a weapon.

These nonfree market forces can easily kick up prices in a laissez-faire oil economy. Last year, Americans paid 17 percent more for energy than in 2004, making energy the largest driver of inflation. Another oil shock like that in 1973 could cost $8 trillion, or almost two-thirds of GDP. Such a potentiality pushes even free-market conservatives to ask for a larger federal role in oil, simply for national survival."

Someone e-mailed me recently regarding the Exxon boycott, and he described oil as a fungible commodity. That's true, but it's also a finite commodity, it will become evermore valuable as there is less and less available and becomes harder and harder to extract and refine. It's not a good example for free market capitalism, especially given the examples in this interesting article.
Email ThisBlogThis!Share to TwitterShare to FacebookShare to Pinterest
Labels: decline of empire, energy, peak oil

"Ed" posted a comment to one of my "war pricetag" posts from back in January and he had some interesting points about how much entitlement programs cost. Click on the link to see my original post, now with 2 (make that 8, and I have a reply brewing) comments, yay!
Email ThisBlogThis!Share to TwitterShare to FacebookShare to Pinterest 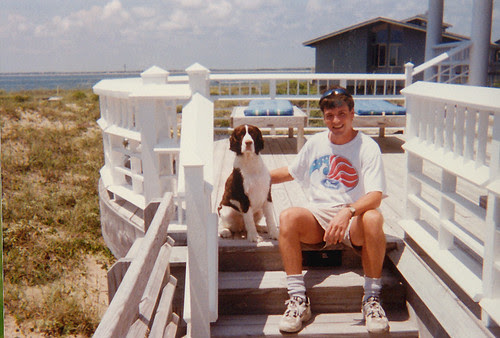 Mom has been kind enough to dig up some old Marley photos and I've been scanning them into the flickr account. This one has to be a favorite, what a cute pup. I was wearing that shirt when I shook Bono's hand at Clemson in 1997. Time flies...

"Two senior military officers are known to have challenged Defense Secretary Donald Rumsfeld on the planning of the Iraq war. Army General Eric Shinseki publicly dissented and found himself marginalized. Marine Lieut. General Greg Newbold, the Pentagon's top operations officer, voiced his objections internally and then retired, in part out of opposition to the war. Here, for the first time, Newbold goes public with a full-throated critique:

In 1971, the rock group The Who released the antiwar anthem Won't Get Fooled Again. To most in my generation, the song conveyed a sense of betrayal by the nation's leaders, who had led our country into a costly and unnecessary war in Vietnam. To those of us who were truly counterculture--who became career members of the military during those rough times--the song conveyed a very different message. To us, its lyrics evoked a feeling that we must never again stand by quietly while those ignorant of and casual about war lead us into another one and then mismanage the conduct of it. Never again, we thought, would our military's senior leaders remain silent as American troops were marched off to an ill-considered engagement. It's 35 years later, and the judgment is in: the Who had it wrong. We have been fooled again."

There's been a lot of "I told you so's" to hand out since the invasion ended and the occupation began. This one comes from a powerful source and he's right...we should not have invaded and we can't leave yet. He doesn't offer a lot of suggestions on what to do now though...we're stuck in a moment and we can't get out of it.

Here's a way to kill two birds with one stone....we can send the "undocumented workers" to fight in Iraq....Americans don't want those jobs, right? Just thinking outside the box...

Buckley Says Bush Will Be Judged on Iraq War, Now a 'Failure': "William F. Buckley Jr., the longtime conservative writer and leader, said George W. Bush's presidency will be judged entirely by the outcome of a war in Iraq that is now a failure.

``Mr. Bush is in the hands of a fortune that will be unremitting on the point of Iraq,'' Buckley said in an interview that will air on Bloomberg Television this weekend. ``If he'd invented the Bill of Rights it wouldn't get him out of his jam.''"

and this from John Dean (of Watergate fame):

"I think it is important that the committee sometimes hear from the 'dark side'," the former special counsel to Nixon told a hearing on a Senate censure motion made against Bush.

"I think that is what we have going on in this presidency."

NC Cash Search:
"The Next Step is Up to You
If money is owed to you, it’s yours whenever you want it. Reclaiming your money is very simple. First, enter your name in the boxes below to see if money is owed to you. If there is a match, fill out a claim form and send it in with the required documentation. If you need assistance, please call 919-508-1000 and select option 1. After you have completed the claim form and provided the necessary documentation, you should receive your money in 4-6 weeks. "

Do you have unclaimed money in NC? Click on this link to check yourself. Saw Tracey on there and we'll be tryin' this out.
Email ThisBlogThis!Share to TwitterShare to FacebookShare to Pinterest

"While organizers say a big turnout and a broad diversity at Monday's events will send a signal to politicians in Washington wrangling over immigration reform, others see possible down sides.

"Each time immigrants have these giant rallies, the more they infuriate the rest of the American population with the idea that those who break the law get to march and somehow be rewarded," says Ira Mehlman, L.A. spokesman for Federation for American Immigration Reform. "We have seen in France what happens when you try to bring in millions of people ... in many cases who are hostile. We saw there that it didn't work, and it won't work here.""

I'm all for some immigration reform, we need to let more in legally, but these marches are rediculous. We may not be able to gather up all 11 million "undocumented workers", but it seems to me that these marches would be the perfect place to round up the ones who flaunt their status. They're here illegally, yet are brazen enough to march the streets in public? Being illegal here should not be so easy...

"For the metal oxide we chose cobalt oxide because it has very good specific capacity, which will produce batteries with high energy density," meaning it can store two or three times more energy for its size and weight compared to previously used battery electrode materials. And adding the gold further increased the wires' energy density, she added.

Equally important, the reactions needed to create nanowires occur at normal room temperatures and pressures, so there is no need for expensive pressure-cooking technology to get the job done.

The work is important, too, because energy density is a vital quality in batteries. A lack of energy density - meaning the amount of charge a battery of a given size can usefully carry - is what has hampered development of electric cars, since existing batteries are generally too heavy and too weak to compete with gasoline as an energy source. Still, battery technology is gradually being improved and may someday even become competitive as the price of oil escalates.

"The nanoscale materials we've made supply two to three times the electrical energy for their mass or volume, compared to previous materials," the team reported.

"A lot of people in Washington are getting rich off earmarks, and it's about time I got my piece of the pie. So members of Congress, if you're reading this, how about sending an earmark my way - perhaps in the form of a shiny new boat?

Not a yacht or anything fancy, just a modest speedboat that would only set Uncle Sam back $30,000.

To some critics, this earmark might represent an inappropriate use of taxpayer dollars. Curmudgeonly tight-wads would grumble about excessive federal spending and mounting deficits. Elitist "good government" types would complain about the abuse of political clout and the propensity of such behavior to breed corruption. Esoteric political scientists might decry the unfortunate ease with which money is misspent when government bestows a generous benefit to a small group of people (in this case, me and my drinking buddies) at the expense of a larger group (taxpayers).

But I don't buy that mumbo-jumbo anymore. I think my boat would be a jobs machine. I'll purchase an American-built boat from a local dealer, thus creating a number of manufacturing and service-sector jobs.

Just think: Who's going to scrape the barnacles off the bottom of my boat? Who will supply the gasoline? Who will provide winter storage?

As hardworking Americans service, clean and store my boat, they will pay sales, income and other taxes. Much of this money will be sent back to Washington, where it can be used to further expand the economy through earmarking."

This article appeared in the Myrtle Beach Sun News, April 2, 2006.

Zephyr in the sky at night

Solar Powered Plane Might Fly Continuously For Weeks
"Called the Zephyr, it's an aircraft that can fly continuously using nothing but solar power and "low drag aerodynamics". The combination of solar panels on the upper wing surface and rechargeable batteries allows Zephyr to be flown for many weeks and even months. The first flight trial of the Zephyr were conducted recently by QinetiQ in White Sands Missile Range, New Mexico."
Email ThisBlogThis!Share to TwitterShare to FacebookShare to Pinterest
Labels: science
Newer Posts Older Posts Home
Subscribe to: Posts (Atom)