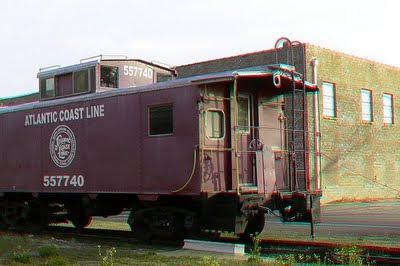 The Museum of Tropical Queensland in Australia is featuring one of my 3D anaglyph photos in their new Train exhibition.

This is one of my older single-camera pictures, not the best 3D I've done, but hey, I'll take it. Thanks!
Email ThisBlogThis!Share to TwitterShare to FacebookShare to Pinterest
Labels: 3D, anaglyph, Train

I've been wanting to read Frank Shaeffer's book "Crazy for God", especially after reading an article like this on Alternet (read the whole thing): "We might actually be able to change the conversation in America about religion.

Is that important? Yes, like it or not religion will not go away. It motivates the worst in the American psyche and some of the best too. It is Joe Wilson's religion of hate but it also motivated Martin Luther King Jr.

Perhaps a generation from now the image of a typical Christian won't be a hate-monger like James Dobson but rather a lover of peace such as Bishop Desmond Tutu, or a literary giant like John Updike, and yes, a President Obama.

The only real answer to the hijacking of Christianity by the Religious Right, the longevity of religion-based racism, and the backward and inward looking movement we now call "American Christianity" is not to talk everyone out a having faith but rather to fight for the humane and ancient thread found within the Christian tradition. Blaming everything on race is too easy."

It's all about saving the planet ;-)

Cybraphon Demo Song (The Balkan Bazaar) from Cybraphon on Vimeo.