After that game last night, I need "Somewhere to Lay My Head". This is a fantastic gem...be sure to stick around for the last minute to see the foot moves. This was way before James Brown. This is Rev. Julius "June" Cheeks, from Spartanburg, SC. I found this and a lot more gold at TheHoundBlog.

In this article, Paul Krugman says that Republicans don't want social security and medicare anymore. Is this right?

One side of American politics considers the modern welfare state — a private-enterprise economy, but one in which society’s winners are taxed to pay for a social safety net — morally superior to the capitalism red in tooth and claw we had before the New Deal. It’s only right, this side believes, for the affluent to help the less fortunate.

The other side believes that people have a right to keep what they earn, and that taxing them to support others, no matter how needy, amounts to theft. That’s what lies behind the modern right’s fondness for violent rhetoric: many activists on the right really do see taxes and regulation as tyrannical impositions on their liberty.

There’s no middle ground between these views. One side saw health reform, with its subsidized extension of coverage to the uninsured, as fulfilling a moral imperative: wealthy nations, it believed, have an obligation to provide all their citizens with essential care. The other side saw the same reform as a moral outrage, an assault on the right of Americans to spend their money as they choose.

This deep divide in American political morality — for that’s what it amounts to — is a relatively recent development. Commentators who pine for the days of civility and bipartisanship are, whether they realize it or not, pining for the days when the Republican Party accepted the legitimacy of the welfare state, and was even willing to contemplate expanding it. As many analysts have noted, the Obama health reform — whose passage was met with vandalism and death threats against members of Congress — was modeled on Republican plans from the 1990s.

A Tea Party takeover of the Republican Party has made these decades-old agreements (SS, Medicare, Unemployment Insurance, etc.) into arguments again. They want to roll it back to pre-1930. Just listen to the books Glenn Beck recommends. Heck, his whole show last night was about Freud's nephew and advertising to control people's minds. But I digress.
The question remains... do Republicans still support Social Security/Medicare, etc? Do they just not want to fully fund it? Do they want it, but don't want to pay taxes for it? WHAT is the deal?
Email ThisBlogThis!Share to TwitterShare to FacebookShare to Pinterest
Labels: paul krugman, Republican party, social security, Tea Bag 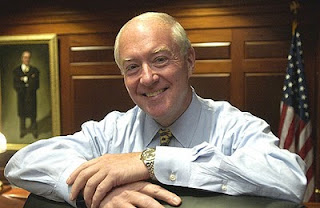 Hey, that ol' VA Judge Hudson sure seemed familiar when he became the only Judge (out of what, 14?) to find the Health Care Law unconstitutional. He seemed familiar to me because I did my high school Senior Speech on pornography, and the Meese Commission that Hudson led.
Interestingly enough, in the porn case, he argued that the Commerce Clause allowed the Fed to control all pornography. But now, conveniently, he doesn't see the Commerce Clause the same way he did back then. Basically he likes it when it works for him and not so much when it works against him.
Email ThisBlogThis!Share to TwitterShare to FacebookShare to Pinterest
Labels: Juge Henry Hudson, Meese Commission

"In news from Capitol Hill, Congressman Darrell Issa (R-CA) has asked the oil industry, drug manufacturers, healthcare providers and telecom firms to tell him which government regulations he should target this year as the new chair of the House Oversight and Government Reform Committee."

There it is, that wonderful Jim Cramer advice...."just ask the big corporations what they want, and give it to them".

Issa better watch his ass-a. We're on to you.
Email ThisBlogThis!Share to TwitterShare to FacebookShare to Pinterest
Labels: Darrell Issa, decline of empire, Jim Cramer

From David Dayen, "Corporations Show Largest Profits in History Amid Jobs Crisis", an article that exposes some truth:

"Despite record unemployment, and no hope for reductions clearly in sight, corporations have experienced all-time record profits, the highest since the Commerce Department started tracking the figure 60 years ago. They’ve learned to produce as many or more goods without workers.

This is something of a dream for corporate America – bigger profits without those meddling workers to pay. This is the seventh straight quarter of corporate profit growth, with none of those benefits being shared with the working class. “Uncertainty” is blamed for the lack of job growth, but corporations are sitting on giant mounds of cash while they bask in the glow of their strategy to increase their profit margins by cost-cutting.

The other part of this is that multinational corporations are reaping profits from increased consumer spending in China and India. Their markets there have expanded greatly in the past few years.

In the other side of the funhouse mirror, American workers continue to have little hope for returning to the job."

Congrats corporations, you win!
Email ThisBlogThis!Share to TwitterShare to FacebookShare to Pinterest
Labels: chamber of commerce, decline of empire, jobs 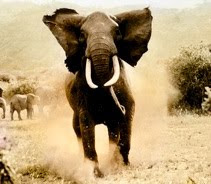 Joshua Holland has an interesting piece on Alternet about the "9 Biggest Conservative Lies About Taxes and Public Spending". They do try to confuse the public about the numbers, and this article hopes to clear up some of those misconceptions. It shall therefore be ignored. So, here are the 9 points, click through to the article to see them explained in glorious detail:

"It’s a measure of how rapidly our economic order has shifted that nearly a quarter of the 400 wealthiest people in America on this year’s Forbes list make their fortunes from financial services, more than three times as many as in the first Forbes 400 in 1982. Many of America’s best young minds now invent derivatives, not Disneylands, because that’s where the action has been, and still is, two years after the crash. In 2010, our system incentivizes high-stakes gambling — “this business of securitizing things that didn’t even exist in the first place,” as Calvin Trillin memorably wrote last year — rather than the rebooting and rebuilding of America.

That's as close an answer as I've found for my question "How many in the top 2% of wage earners work in the finance industry?" The Forbes list counts accumulated wealth, not how much one makes in a year, so I imagine that top 2% is even more chock full of finance industry folks. You know, the industry that shat in its pants and spread it all over...us. Screw them. I see folks who bought moderate houses at the peak and are now tens of thousands of dollars in debt, underwater in their homes. I'd like to take some finance executives' clearly unearned bonuses and fix this situation...

" companies that actually make things (and at times innovative things) have been devalued, looted or destroyed by a financial industry whose biggest innovation in 20 years, in the verdict of the former Fed chairman Paul Volcker, has been the cash machine."

And the cash machine.... they're making a mint on this, too! They got to fire half the tellers in America, and they charge $3-$10 per transaction if you can't find "your" bank machine. Sometimes I think the best solution is a money mattress, like this one the new head of BOA uses: 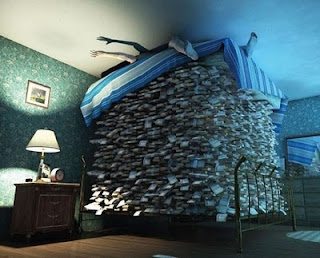 Update: I just have to add in here the article by Sarah Anderson ("Bankers' Pay Still Skyrocketing, as Wall Street's Casino Rolls On"), where she talks about a TV appearance she made back in '07:

My offense? I questioned whether Mozilo really deserved to be the sixth-highest paid CEO in the country, given that the company's sub-prime mortgages were already showing clear signs of toxicity, with skyrocketing foreclosure rates.

Suddenly I had show host Carl Quintanilla and the other guests, including David John of the Heritage Foundation, shouting me down, saying that Mozilo had built the company from nothing and shareholders should be happy to give him every penny of his $42.9 million in compensation.

Looking back, it's hard to find a clearer example of the business press blindly glorifying highly paid CEOs. As we all know today, Mozilo's reckless subprime adventures were a disaster for the company and the country. Four months after that CNBC show, Countrywide no longer existed."