Pat Buchanan gets it right again on the recent Republican debate, and he spotlights the best underdog in the Republican field, Ron Paul:

"After the debate, on Fox News' "Hannity and Colmes," came one of those delicious moments on live television. As Michael Steele, GOP spokesman, was saying that Paul should probably be cut out of future debates, the running tally of votes by Fox News viewers was showing Ron Paul, with 30 percent, the winner of the debate.

Brother Hannity seemed startled and perplexed by the votes being text-messaged in the thousands to Fox News saying Paul won, Romney was second, Rudy third and McCain far down the track at 4 percent. ...

...Ron Paul is no TV debater. But up on that stage in Columbia, he was speaking intolerable truths. Understandably, Republicans do not want him back, telling the country how the party blundered into this misbegotten war.

By all means, throw out of the debate the only man who was right from the beginning on Iraq. "

Pat Buchanan may be my favorite pundit. I hope Ron Paul can get some traction, if only to anger Brother Hannity.

Another General Speaks Out 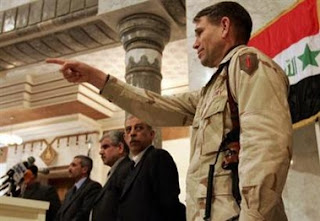 General John Batiste just couldn't take it anymore. He's speaking out about what's happened "on the ground" in Iraq and as one may imagine, it ain't pretty:

"“You (President Bush) continue to pursue a failed strategy that is breaking our great Army and Marine Corps. I left the Army in protest in order to speak out. Mr. President, you have placed our nation in peril. Our only hope is that Congress will act now to protect our fighting men and women.”
Those are powerful, inflammatory words from General Batiste, a retired major general who spent 31 years in the Army, a profession sworn to unflinching loyalty to civilian control of the military....
“I am outraged, as are the majority of Americans,” General Batiste said over sandwiches in a blue-collar diner here. “I am a lifelong Republican. But it is past time for change.”...
“In the Army, you communicate up the chain of command, and I communicated vehemently with my senior commanders while I was in Iraq,” he said. Of his departure from the Army, he said: “It was the toughest decision of my life. I paced my quarters for days. I didn’t sleep for nights. But I was not willing to compromise my principles for one more minute.”"

Good for him. But, it would have been better for us if he and others had been more outspoken about the possibilities in Iraq before the war. But I'm still proud of him for speaking out now, now that we KNOW.
Email ThisBlogThis!Share to TwitterShare to FacebookShare to Pinterest
Labels: bush, general, iraq war, John Batiste

"General Odom has served as Director of the National Security Agency and Assistant Chief of Staff for Intelligence, the Army’s senior intelligence officer.":

"“To put this in a simple army metaphor, the Commander-in-Chief seems to have gone AWOL, that is ‘absent without leave.’ He neither acts nor talks as though he is in charge. Rather, he engages in tit-for-tat games.

“Some in Congress on both sides of the aisle have responded with their own tits-for-tats. These kinds of games, however, are no longer helpful, much less amusing. They merely reflect the absence of effective leadership in a crisis. And we are in a crisis.
“Most Americans suspect that something is fundamentally wrong with the President’s management of the conflict in Iraq. And they are right.
“The challenge we face today is not how to win in Iraq; it is how to recover from a strategic mistake: invading Iraq in the first place. The war could never have served American interests."

I thought Bush was ready to show some humility after the election, Rumsfeld ouster, and the Baker report, but he still seems as strong-headed as ever. Bush is a lamer lame duck than Tony Blair, and that is one reason why the election season kicked off so soon this time. We're ready for somebody new. Almost anybody new will do.

Don Imus: A mass media lynching like I've never seen. I think "Nappy Headed Hos" is inherently funny, and an 80 year old geezer saying it on the radio makes it even funnier. Imus has been doing this type of degradation since he began, and only our PC culture has changed. We've become less tolerant and understanding, and we easily confuse humor with racism/sexism/whateveryougot-ism. In today's America, the only people we can still taunt as a class are white men and/or rednecks. I never thought Imus was all that great, but he was kind of an institution. When did we all get so thin-skinned? Amazing how all the folks who flogged their new books on his show ran like rats.

Cheryl Crowe: She advocates using less TP. A lot less. One square, unless you really need two or perhaps three squares, is a small sacrifice to make in order to save the planet.
Toilet paper is one of the human innovations that has made us more comfortable everyday, in a good way. I use what I consider a reasonable ammount. It's more than three squares. And that is one thing I'm not giving up.
My wife suggests that if Sheryl Crow really feels this way about TP, she should use a rag, and carry it with her wherever she goes. Toilet paper is what makes our culture worth fighting for, and I'm happy she got such a backlash.

Rosie O'Donnell: While I like her beating up Donald Trump (the WWF notwithstanding), she's off her rocker when she intones that 9/11 was "set up" by our own government. Rosie, you may be right that War in Iraq was a bad idea, but you defeat yourself when you start spreading this kind of BS. We all saw the planes hit the buildings, and yes, fire does melt steel (that's how we make things with steel....we melt it!)

Cho: Pop! There goes the culture. Freaking bastard. Stopping these mental defects is a lot like defeating terrorism. You never know when one of these wackos is going to show up, and their actions make no sense to rational people. We need to try to stop people like this, but at the same time, we need to realize that crazy, stupid sh*t like mental defects with guns, and terrorists with suicide jackets will always be around in some form, and we'll never stop them all.

Jon Bon Jovi: What concern he showed that a contestant on American Idol would change around a small bit of his tune: "You Give Love a Bad Name". Yeah, how dare he mangle that classic. Jose Feliciano where are you? Kudos to Simon for repeatedly saying that he was "not familiar with that song" after contestants sang Bon Jovi's "hits".
Email ThisBlogThis!Share to TwitterShare to FacebookShare to Pinterest
Newer Posts Older Posts Home
Subscribe to: Posts (Atom)