Great line from one of the many articles like this....
"Keeping foreign troops in Iraq will not "prevent civil war", as if they were doing that now. They are largely preoccupied with defending their fortress bases, their presence offering target practice for insurgents and undermining any emergent civil authority in Baghdad or the provinces. American and British troops may be in occupation but they are not in power.

They have not cut and run,

but rather cut and stayed. "
Email ThisBlogThis!Share to TwitterShare to FacebookShare to Pinterest
Labels: decline of empire, iraq war

Wired waxes on and on about how to simplify the technology of the voting booth. They propose eliminating memory cards ("To prevent someone from tampering with the cards, workers are supposed to place tamper-evident tape over the memory-card compartment. But workers often forget to install the tape or take proper action when they discover that the tape over a compartment has been broken.") and simplifying the computer code ("If you've got 50,000 lines of code, that's approaching the complexity of the U.S. tax code").

I dare to ask, can we not just use pencils? There's your hard copy!

"Researchers in Italy have high hopes for a new wind-power generator that resembles a backyard drying rack on steroids. Despite its appearance, the Kite Wind Generator, or KiteGen for short, could produce as much energy as a nuclear power plant. Here's how it works: When wind hits the KiteGen, kites spring from funnels at the ends of poles. For each kite, winches release a pair of high-resistance cables to control direction and angle. The kites are not your Saturday-afternoon park variety but similar to those used for kite surfing -- light and ultra-resistant, capable of reaching an altitude of 2,000 meters."

This is smart thinking, alternative sources of energy like kites will make a difference. One source of energy we could potentially tap is gravity....there's gotta be a way. 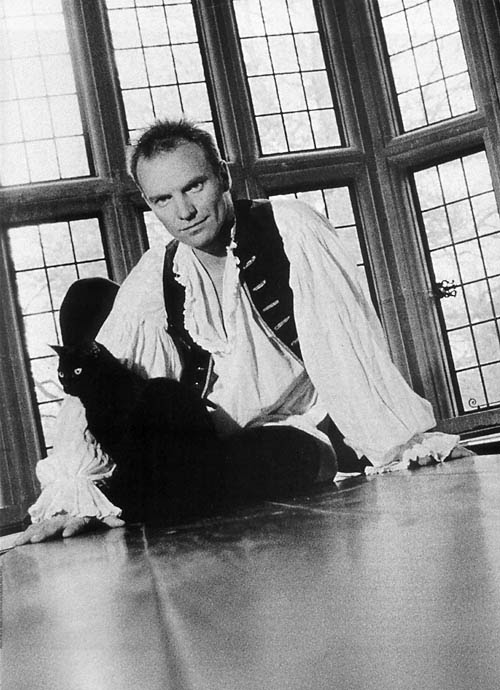 The former teacher who shot to fame as lead singer, bassist and composer in the 1970s and 80s for The Police told German newspaper Die Zeit that he prefers singing songs of Elizabethan lutenist and composer John Dowland to the rock music of today.

His album of Dowland lute music "Songs from the Labyrinth" has topped classical charts on both sides of the Atlantic and entered the UK album chart at No. 24."

Well, maybe if some of the big rock stars out there sang rock music, it wouldn't be so stagnant, Mr. Sting. But no, some egotistical rock stars quit their good band, go on to release whiny white boy reggae/jazz fluff, do commercials for upscale car companies, and brag of sexual prowess, before giving it all up and doing albums of "Dowland lute music". Sting is through with rock and he admits it....finally, 20 years after the fact.
Email ThisBlogThis!Share to TwitterShare to FacebookShare to Pinterest
Labels: music, Sting 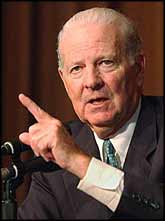 James Baker....the man who does the tough jobs for George W.:

"In the face of this disaster — on the ground and in the public’s mind — someone has to tell the president the truth, and James Baker was made for the role. A Bush family loyalist his whole career, he served George the Elder as secretary of state, and then, after the 2000 election, captained the legal team that made George the Younger president.

The Iraq Study group (which Baker co-chairs with Democrat Lee Hamilton) is a strange animal, created by Congress and a bunch of think tanks. Its recommendations would probably disappear on a dusty shelf except for one thing: the widespread belief that Baker is acting with the blessing of his old friend, Bush 41.

There’s a long and complex history here. Bush the Elder refuses to criticize his son in public, but after the first Persian Gulf War, he made clear his view that invading Iraq was a dreadful idea. Baker shares that opinion, and wrote recently that deposing Saddam Hussein after the 1991 conflict would have triggered a civil war and left the United States confronting “a military occupation of indefinite duration.”

Bush the Younger obviously didn’t listen to these prescient warnings. Instead he picked a defense secretary, Don Rumsfeld, who his father deeply distrusted, and made invading Iraq the keystone of his presidency."

Look for more goodness from these guys when we can be more thruthful. You know, after the election.

"President Bush stands atop the ramp to Air Force One with rock singer Bono and former model Christy Turlington at Chicago O'Hare International Airport in Chicago Thursday, Oct. 12, 2006. They had an impromptu meeting about AIDS relief on Air Force One before Bush returned to Washington. (AP Photo/Charles Dharapak) "
Email ThisBlogThis!Share to TwitterShare to FacebookShare to Pinterest
Labels: Bono, george w. bush

"Yeah, who are they to be charitable and do good things for people in need?" seems to be the theme running through this article in Christian Science Monitor by the esteemed staff writer Scott Baldauf.

He's not as smart as his bio suggests and this simple mistake blows his whole argument if you ask me:

"British pop singer Bono, of the rock group U2, has set up a Washington-based pressure group called DATA, which lobbies in the halls of Congress and in European capitals for debt relief among Africa's poorest nations. He's also launched high-end "ethical clothing" labels that promise fair working conditions in African textile factories."

Stick with the meaty stories, dude. British pop singer, please! Look what Bono has convinced these corporations to do....RED

We will surpass 300 Million folks here in the USA this month. A couple of interesting facts:

"an analysis of Census Bureau data conducted by the Center for Immigration Studies indicates that the first half of this decade – 2000 to 2005 – has been the highest five-year period of immigration in American history and that nearly half of post-2000 arrivals are illegal."

and this can't be good for Mexico:
"approximately 10 percent of Mexico's population of about 107 million people is now living in the United States, and roughly 15 percent of that country’s labor force is working in America."

Click here to see the Edge and a band in New Orleans give a different life to Vertigo. Hola!
And don't forget to check out Music Rising....they're bringin' New Orleans back
Email ThisBlogThis!Share to TwitterShare to FacebookShare to Pinterest
Labels: music, the edge, u2, Vertigo
Newer Posts Older Posts Home
Subscribe to: Posts (Atom)