"Earlier this month, Bush made reference to "doubling the size of the Border Patrol during my administration."

These numbers really speak for themselves. And then there's the budget....

From this article , titled " Greenland's Ice Sheet Is Slip-Sliding Away":


"From cores of ancient Greenland ice extracted by the National Science Foundation, researchers have identified at least 20 sudden climate changes in the last 110,000 years, in which average temperatures fluctuated as much as 15 degrees in a single decade."


Sudden temperature changes have happened scores of times before, without humans to blame.


That's a truth that's inconvenient for Gore and the in-liars he represents. (He kept referring to any dissenters as "out-liers" on a TV interview "There will always be outliers that refuse to learn the truth, the issue has been decided in the scientific community"....that term really bugged me because of its "liar" connotation. A-hole.) The thing is, I agree the planet shows signs of warming over the past 100 years. But I think it's not all bad news....only 1 degree despite burning half the planet's fossil fuel? Great! Would it be better for humans for the planet to be cooling? No. We've been fortunate with the climate for the past 10,000 years, but there are no guarantees for what the future will hold, no matter what we do. Where are the holes?

Sprinkled throughout this article that looks to originate with the AP.

"...the last few decades of the 20th century
were warmer than any comparable period in the last 400 years," the
panel wrote. It said the "recent warmth is unprecedented for at least
the last 400 years and potentially the last several millennia," though
it was relatively warm around the year 1000 followed by a "Little Ice
Age" from about 1500 to 1850."

Yeah, things have been all normal, 'cept for those warm years and then the 350 year ice age.

"It had compared the sharp curve of the hockey
blade to the recent uptick in temperatures _ a 1 degree rise in global
average surface temperatures in the Northern Hemisphere during the 20th
century _ and the stick's long shaft to centuries of previous climate
stability." (since that recent ice age, that is)

"Between 1 A.D. and 1850, volcanic eruptions and
solar fluctuations had the biggest effects on climate. But those
temperature changes "were much less pronounced than the warming due to
greenhouse gas" levels by pollution since the mid-19th century, the
panel said."

Yeah, except for that "Little Ice Age" and those "warm years". Climate changes, weather changes, and that IS normal. What, did the sun and volcanoes disappear in 1850? Yes, we've added a lot of CO2 to the atmosphere in the last 150 years....but we've only seen a 1 degree average temperature change....that is good news! But just because the sky isn't falling (you heard it here first), doesn't mean we can rest...there are many dire things that can happen to humanity.

Check out this website and watch Zete bro Bogie Bowles jam with his 3 piece band. More pictures there, too, enjoy...
Email ThisBlogThis!Share to TwitterShare to FacebookShare to Pinterest
Labels: Bogie Bowles, music

"The Inconvenient Truth" is indeed inconvenient to alarmists
By Tom Harris

"Professor Bob Carter of the Marine Geophysical Laboratory at James Cook University, in Australia gives what, for many Canadians, is a surprising assessment: "Gore's circumstantial arguments are so weak that they are pathetic. It is simply incredible that they, and his film, are commanding public attention."
But surely Carter is merely part of what most people regard as a tiny cadre of "climate change skeptics" who disagree with the "vast majority of scientists" Gore cites?

No; Carter is one of hundreds of highly qualified non-governmental, non-industry, non-lobby group climate experts who contest the hypothesis that human emissions of carbon dioxide (CO2) are causing significant global climate change. "Climate experts" is the operative term here. Why? Because what Gore's "majority of scientists" think is immaterial when only a very small fraction of them actually work in the climate field."

Most everyone accepts the global warming idea, and the fact that humans cause it and can correct it. Disagree, and they presume you're ignorant. But the more scientists know about the subject, the less certain they are about global warming and "weather" or not it is caused by the CO2 increase. Click through to read the whole article. Email ThisBlogThis!Share to TwitterShare to FacebookShare to Pinterest
Labels: Mazda 3

"Momentous change is approaching in American politics. Conceivably, the turning point has already arrived, too indistinct to recognize. We are witnessing the demise of the reigning economic ideology. A deep shift of this kind is a very rare event, one that comes along only every thirty or forty years. Economic disorders accumulate that the orthodoxy cannot answer and may even have caused. Eventually, the ideological presumptions are discredited by real-world contradictions. "

I don't agree with 100% of this, but I really like it when people think big about problems like Greider does here. Interesting read...
Email ThisBlogThis!Share to TwitterShare to FacebookShare to Pinterest
Labels: decline of empire, William Greider

"Hardly a day goes by without some kind of warning that mankind's use of fossil fuels, especially in the U.S., is causing global warming. Stossel looks at the numbers. Half of this century's global warming happened between 1900 and 1945. Stossel asks, "If man is responsible, why wasn't there much more warming in the second half of the century? We burned much more fuel during that time."

By the way, if there is global warming, it might be a godsend. According to Harvard astrophysicist Sallie Baliunas, added carbon dioxide helps plants grow. Warmer winters give farmers a longer growing season, and the warming might end the droughts in the Sahara desert.

There's another consideration. For the past 800,000 years, there have been periods of approximately 100,000 years called Ice Ages, followed by a period of 10,000 years, a period called Interglacial, followed by another Ice Age. We're about 10,500 years into the present Interglacial period – namely, we're 500 years overdue for another Ice Age. If indeed mankind's activity contributes to the planet's warming, we might postpone the coming Ice Age."

I think there is global warming, but to say that it's solely or even mostly man's fault is giving us too much credit, in my opinion. We've burned through almost half of Earth's fossil fuel in a little over 100 years, with only a small measurable effect. I'd bet we could finish off all the fossil fuel on the planet and it won't make much more of a difference. The problem will be....we're out of fossil fuel! How will we make plastics and all the beneficial things we make from oil? Just think of all the oil-based products we use and need....for medicine alone! Ah, but I digress. Look, I'm all about protecting the environment, but the whole global warming thing seems blown out of porportion to me....we can do more for the environment by targeting specific chemicals...look what success we've had with the ozone layer and DDT. Global Warming? Sure, it happens, but we probably don't have a lot to do with it, and it's better for humans to be it a warming trend than a cooling one, so let's celebrate! Of course, I 'm probably wrong, and our coastal cities will all be underwater in 30 years, AND we'll be out of oil. Won't this post look silly?

The Zete House has a new website, looks good!
Bonus: Zete Gear
Email ThisBlogThis!Share to TwitterShare to FacebookShare to Pinterest

YouTube has some golden U2 clips from back in the day, and this 10 minute set from the BBC in '82 has an American Bandstand feel, check out those 80's dance moves and the fashion. The music sounds as vital as ever to me...A Celebration and Rejoice together....wow!
Email ThisBlogThis!Share to TwitterShare to FacebookShare to Pinterest
Labels: u2, youtube Played some b-ball at the Wallace-Rose Hill gym last night, fun time!
Email ThisBlogThis!Share to TwitterShare to FacebookShare to Pinterest 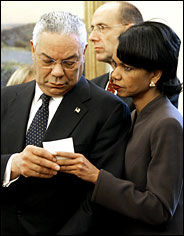 Wow....maybe Condi's been reading my blog:

"But the story of how a president who rarely changes his mind did so in this case — after refusing similar proposals on Iran four years ago — illustrates the changed dynamic between the State Department and the White House in Mr. Bush's second term. When Colin L. Powell was secretary of state, the two buildings often seemed at war. But 18 months after Ms. Rice took over, her relationship with Mr. Bush has led to policies that one former adviser to Ms. Rice and Mr. Bush said "he never would have allowed Colin to pursue."

It is unclear how much dissent, if any, surrounded the decision, which appears to have been driven largely by the president, Ms. Rice and Mr. Hadley, with other senior national security officials playing a more remote role. Both White House and State Department officials say Vice President Dick Cheney, long an opponent of proposals to engage Iran, agreed to this experiment. But it is unclear whether he is an enthusiast, or simply expects Iran to reject suspending enrichment — clearing the way to sanctions that could test the Iranian government's ability to survive."

Like I said, there was no reason not to respond, even Cheney could see that (even if he just wants to "frame" Iran the way we tried to do Iraq). Nice to see W showing some flexibility lately... ah, the power of women.